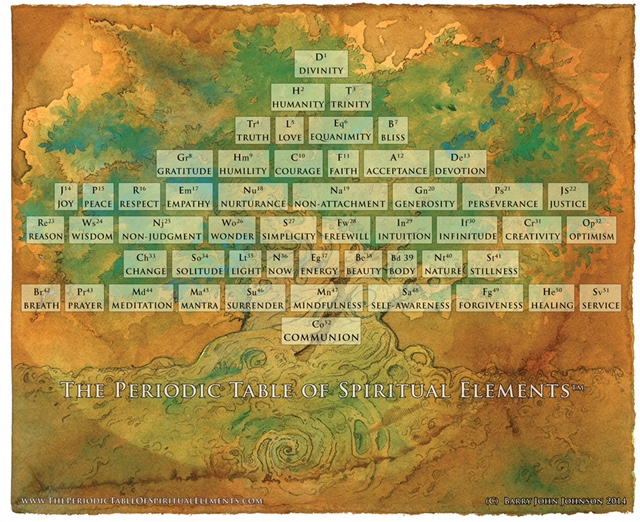 The Periodic Table of Spiritual Elements was created as a way of organizing and discussing spiritual growth and awakening in an accessible and recognizable format. We humans have a tendency to want to classify and organize topics to make them more understandable. Spiritual concepts being intangible and esoteric often don’t lend themselves to such formats.

The Table does this in the style of or in metaphor to the classic and recognizable scientific Periodic Table of Elements used in high school chemistry
classes. That classic scientific model outlines the fundamental building blocks of matter, of all that is. The Spiritual Table attempts to do the same with the fundamental building blocks of spiritual growth, awakening processes and/or attainment.

The Tree of Life motif implies a certain mindset in application and study of the Table in contrast with the classic scientific Periodic Table of Elements and also with the spiritually ordained Tree of Knowledge featured in ancient sacred texts. These two might be said to be more yang in nature, meaning rationally based and rigid in construction.

The Tree of Life implies that the Periodic Table of Spiritual Elements is more flexible and intuitively based. Yin some might say. It requires a receptivity of sorts in application. There is an overlap and fluidity within and between, the Elements. It is mystical in origin. It is a human construction which basically attempts to classify and categorize that which can’t always be so easily parsed.

But doing such does help us to understand and so we have this Table.

There is some method to the Table’s organization generally based upon the horizontal rows. There are the Trinity Elements; the Soul Caliber Elements; the Constants; Heart Centered; Crown Centered; Outer Elements & Active Elements.